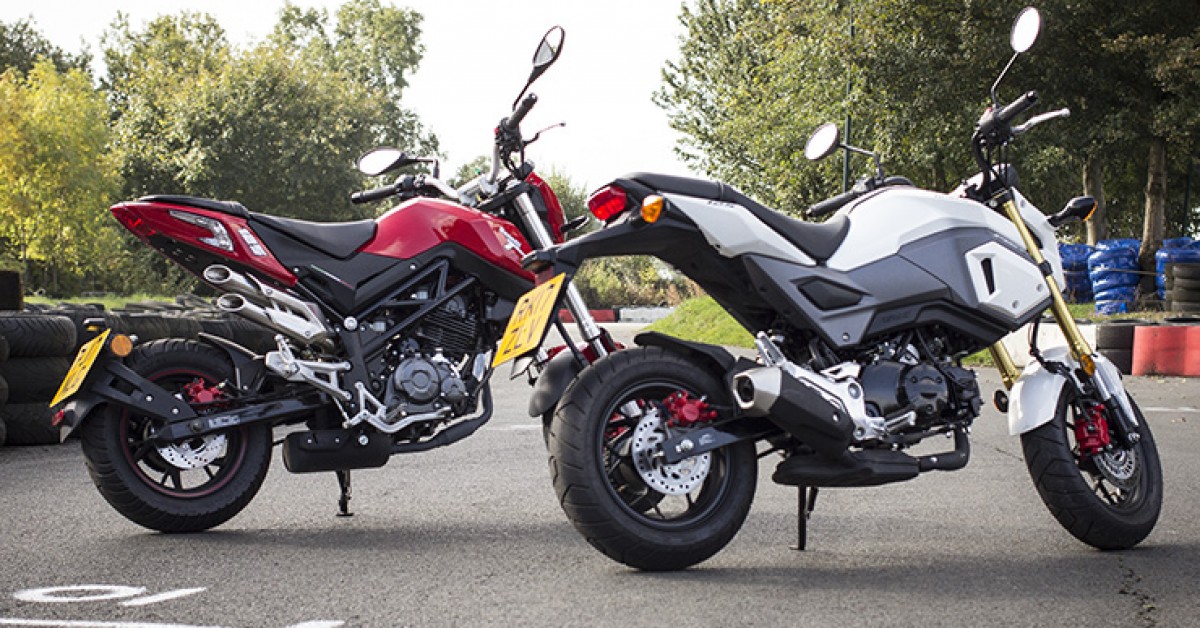 A quick look at these 2 mini rivals

At Nearly £1500 cheaper than its rival, the Benelli TNT 125 is just 60% of the price of a new Honda MSX125. The iconic MSX – or ‘Grom’ – has built such a cult following around the world, and spawned so many aftermarket parts, that it seems bizarre we don’t see more competitors on our roads. Kawasaki makes a great-looking Z125 Pro for $2,999, but it’s not available in Europe as it doesn’t have ABS.
Whether you’re a new rider looking for something with a bit more character than the average 125cc commuter, or a more experienced biker after something that’s a bit of fun, is the Benelli a worthy opponent to Honda’s massive mini?

With its slash-cut, typically Benelli pipes the Chinese-built TNT 125 looks far more valuable than it costs; that exhaust does sound meatier than the Honda, but it won’t be waking up the neighbours, while the mud-guard-mounted number plate seems to divide opinion, but I like the way it creates a clean tail.

It’s only when parked next to Honda’s MSX125 that you realise how much bigger this bike is. The seat’s 780mm off the ground – only 15mm more than the Honda, and while this is still very much a mini-bike, the Grom’s flat engine layout makes for an even more compact machine.

And a lighter one – at 121kg, the Benelli is 20% heavier than the Honda. Not that anybody’s likely to struggle to move this thing around, but on a bike so small, it’s surprising how obvious it is when you jump between the two.

The TNT feels very snappy as you pull away, no doubt helped by the additional cog over the four-speed Grom. Five gears (which are smooth and positive enough) certainly make for more confidence-inspiring overtakes on country roads, but when ridden side-by-side (and swapping riders around to eliminate any weight differences), there was no discernible difference in the acceleration of the two bikes.

UK Importer MotoGB promises a full range of spares in stock at its Chorley HQ. The TNT 125 only launched in June 2017, but there’s already some great looking adjustable anodised footpegs and levers available, and we’ve been told to expect tuning parts in the future.

If you’re buying one of these with the sole intention of bolting on ready-made tuning and styling accessories, you’ll have to wait and see what becomes available, or just buy a Grom. Just keep in mind that going down that road could get expensive!

If economy is all you care about, maybe choose a scooter – there’s no under-seat storage here – but as a first bike, a cheap commuter, or simply a bit of fun on the side, there’s no denying the Benelli offers fantastic value for money. Besides being cheap to buy, it’ll return a real 86mpg (fill to fill, the clock showed 98miles, but 86miles tallies with the actual speed and hence distance). And in the city, something so small is not only easy to filter, its shortness means you can tuck between the front and back of stationary vehicles to really carve through the congestion.

Most buyers won’t have the luxury of having a Honda MSX125 AND a Benelli TNT 125 in their garage. While the TNT does feel a good chunk of that £1500 cheaper than the Grom, it’s still a great bike.

But at just over two grand on the road, it’s a brilliant piece of kit. And for everyday use the gap between the two machines is very small. The average rider that chooses the Benelli is likely to be extremely happy with it, and they’ll definitely have far more of a laugh on it than they would on most ‘normal’ 125s…

SYM Makes a Statement at EICMA 2022

Up To 3 Years Warranty